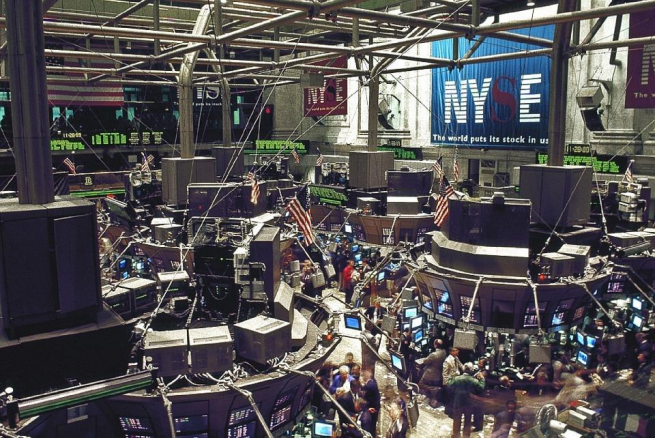 The New York Stock Exchange (NYSE) is the largest stock market in the world in terms of
monetary volume that is traded, in addition to being the first in many companies that
list their shares within this market.

The volume of shares exceeds those of the NASDAQ in addition to many companies
attached to the stock exchange in New York that the NASDAQ.
The New York Stock Exchange has an annual trading volume of more than $ 36 trillion,
in addition to including 12 trillion non-US companies.

• How it works the stock exchange in New York (NYSE)?
Within the rules of the New York Stock Exchange, four very important definitions are
established to correctly interpret the terms, and here we explain them:
o Specialists:
In this fieldwork as market makers or also known as Market Maker which your
goal is to maintain fair trade and tidy and the income, they earn is due to the
Commission to receive for acting as brokers or also by the difference buying and
selling when they act as dealers.
o Commissioned intermediaries:
They are also called commission brokers, and their function is to carry out
operations in the trading room, as employees of stockbrokers can execute
orders from their clients and can also take purchase and sale operations on their
account.
o Recruitment intermediaries:
Also called trading brokers, these help other members to do their job and trade
directly in the stock market for themselves, as they are not authorized to deal
with the public.
o Authorized Operators:
They can carry out operations on their account within the stock market and as
members of the company, there are no commissions for selling or buying shares
on the stock market.

• How can companies list their shares on the New York Stock Exchange (NYSE)?
During the growth of the stock exchange in New York, they have been integrated many
companies in the US and many more worldwide. But not only for this reason, but the
New York Stock Exchange is also considered the most avant-garde and technologically
developed market in the world, which makes it a very important and very stable
exchange.
For a company to be able to list its shares on the New York Stock Exchange, it must meet
a series of standards that we mention:
o It must have at least 400 shareholders who own more than 100 shares each.
o Have at least 1.1 million shares to trade.
o Have a public stock market value that reaches at least $ 40 million.
o The price of each share of the company must be worth at least $ 4.
o Be profitable and comply with the following:
o The aggregate income before tax is $ 10 million in the previous 3 years.
o Have a capitalization of $ 200 million in the global market.
o You must have at least 2.5 million shares outstanding and 5,000 public
shareholders.
Here is a list of companies that go public on the New York Stock Exchange:
o 3M
o ALPHABET
o AMAZON
o AMERICAN AIRLINES
o AMERICAN EXPRESS
o BOEING
o CARNIVAL
o CATERPILLAR INC.
o COCA-COLA FEMSA
o ECOPETROL
o EQUIFAX
o INTEL
o IBM
o JOHNSON AND JOHNSON
o KONAMI
o LEXUS
o MASTERCARD
o METLIFE
o LATAM AIRLINES GROUP
o NIKE
o NORTHROP GUMMAN
o WESTERN PETROLEUM
o PAYPAL
o QUANTUM CORPORATION
o RAYTHEON TECHNOLOGIES
o ROYAL CARIBBEAN
o TIGGO
o SACHS GROUP
o WESTERN UNION
These are some of the companies that are listed on the New York Stock Exchange, a
market that has become a powerhouse and is widely recognized in the world.

• Efforts and sustainability
The New York Stock Exchange knows that carbon emissions are very harmful to human
existence on the planet, which is why it implements practices for energy efficiency and
environmental conservation, such as the following:
o The New York Stock Exchange spends time educating its employees on the
importance of repurposing drinking glasses.
o At the headquarters of the New York Stock Exchange, food is often leftover for
various reasons, so to avoid wasting this food, the excess is donated to the New
York Common Pantry (NYCP) located in Harlem, to redistribute food to people
and families in need.
o A biodegradable waste machine is used to decompose water-based waste, this
work is done every day.
o The stock exchange New York uses glass and aluminum internally to reduce the
use of nonrenewable resources and reduce emissions in excess carbon or.
o The New York Stock Exchange implemented the lighting system with occupancy
sensors, these make the light turn on automatically when someone enters the
room and then turn off when everyone has already left the room, this limits the
amount of energy used, thus reducing carbon emissions.
o Recyclable containers, utensils, and cups are used for outdoor activities and
events instead of plastics.
o Motion detection sinks and toilets have been implemented in the bathrooms to
reduce water waste.
• Places inside the New York Stock Exchange building:
o Trading floor:
At the time of the opening and creation of that floor, it was the only airconditioned space in the New York Stock Exchange building. In the beginning,
when the negotiations were carried out manually, the NYSE expanded to include
5 trading floors, but currently with technology and the internet only 1 floor is
allowed to carry out all the negotiations of transactions on the stock market.
o Map room:
Within this space historical maps are from the collection of corporate art Stock
Exchange New York. Formerly companies included a map to help the valuation
of the company’s assets.
o 1792 (Restaurant)
This on-site restaurant is named after the year the Exchange was founded and
features a mural depicting the 24 founding members, brokers who signed the
Buttonwood deal under the tree that previously existed on Wall Street.
o Room of joints:
The boardroom is one of the most memorable rooms in the New York Stock
Exchange building, built with a glass and iron skylight, as well as having the
original clock that was used to mark time on the trading floor. at the start of the
stock market.
o Secretary’s workroom:
Initially, when the building was inaugurated in 1903, the secretaries and another
employee supported the trading market with operations from a large basement
below the building. The Clerk’s Room was the only workspace above the ground
and employees used it to type and process requests from handwritten
applicants.
o Library
The stock exchange in New York opened a library in 1939 that contains many
books on negotiations. Some of the books that appear in the exhibition cases
were published by members in the late 1800s and feature portraits and
caricatures of some of the most famous and infamous members of the
Exchange.

• Why do companies choose the New York Stock Exchange (NYSE)?
Well, as it is already known, the New York Stock Exchange, the world leader in quotes
and transactions, has been chosen by innovators, visionaries, and leaders for more than
225 years. To help companies access capital and navigate global markets, the NYSE
offers a unique marketplace, unparalleled network, brand visibility, and core services
for companies to continue to grow.
One of the important characteristics of the New York Stock Exchange is that it mitigates
the risk of execution in the market and reduces price volatility by more than 30%. The
NYSE also maintains listing leadership in a variety of sectors from technology and
healthcare to finance and energy.
When companies are ready to go through the NYSE acceptance process, they must go
through the following process:
o Choose your market:
Several different markets are offered designed to meet the needs of companies
of all sizes with all different types of issues (Stocks, Bonds, ETPs, etc.)
o Reserve your ticker symbol:
Choosing your ticker symbol is an initial step in the life of a public company. An
issuer’s symbol is unique and can reinforce branding initiatives.
o Submit your request:
If this is your first-time listing securities on NYSE, NYSE American, or NYSE Arca,
please contact us to get additional information about the process.
o Select your designated Market Maker (DMM):
Your DMM will facilitate price discovery for your stock during market opens,
closes, and during periods of substantial trading imbalances or instability.
• Holidays:
In this section, some holidays utility for the New York Stock Exchange (NYSE) in our
calendar:
o New Year Day on January 1
o Martin Luther King Jr. Day on January 18
o Washington´s Birthday on February 15
o Good Friday on April 2
o Memorial Day on May 31
o Independence Day on July 5 (July 4 holiday observed)
o Labor Day on September 6
o Thanksgiving Day on November 25
o Christmas Day on December 24